We normally downplay V's even-numbered birthdays, but because this year was an Olympic year, I just couldn't resist. I figured that by the time she is turning 12 she won't be as excited about a themed party so I'd better celebrate it now.
We invited three girls from her school for a slumber party and two of them accepted. The plan was to award "medals" for a "make your own pizza" competition, so I made each girl an Olympic medal out of Fimo, with the Olympic rings on one side and something that resembled a pizza on the other. 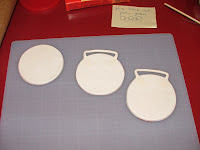 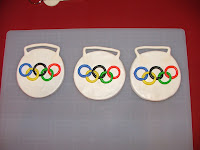 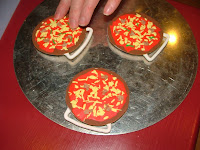 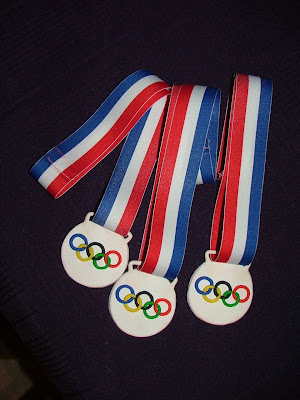 The cake was chocolate with peanut butter cream cheese filling, decorated with fondant. The first cake attempt didn't come out of the pan, but I saved it anyway and used it as the base layer. Even though the corners were crumbling, the fondant does a pretty good job of covering it up. I didn't have enough white fondant to cover the entire cake, so on the long edges I rolled red, white and blue strips together to make stripes. 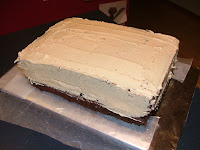 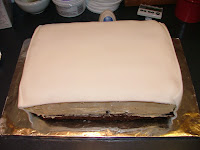 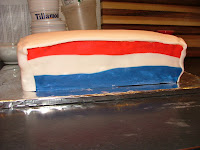 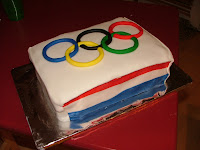 I made a bunch of international flags on labels and wrapped them around toothpicks. 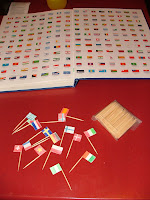 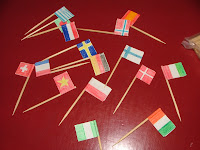 I used extra ribbon from the medals to make bows to cover up the seams on the top edges. It matched the long edges so I think it looked like I planned it that way. 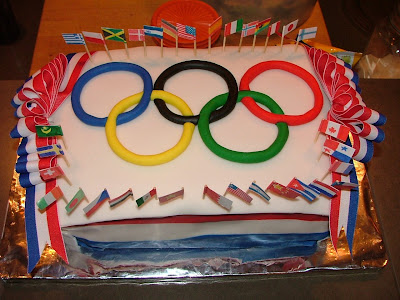 We actually ate this cake with the neighbors the day before her birthday at our monthly "game night". The cake the girls ate was a Ben & Jerry's ice cream cake decorated similarly.
The girls made their own pizzas for dinner, I quizzed them on their knowledge of Winter Olympic sports, then we watched "Cool Runnings", the story of the Jamaican Bobsled Team. They seemed to really enjoy themselves and it was a nice mellow party.
Posted by L. Ottaviano at 7:59 PM 1 comment: